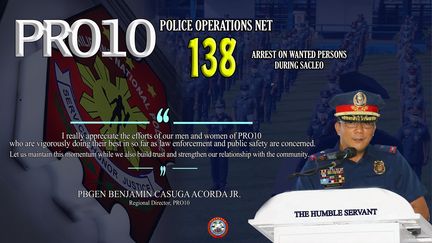 The operation implemented a total of four Search Warrants for R.A. 9165 which resulted in the arrest of four personalities and confiscation of more or less 32 grams of methamphetamine hydrochloride, locally known as shabu, with an estimated Standard Drug Price of PhP241,638.00.

Four other Search Warrants were also implemented on the campaign against loose firearms which also resulted in the arrest of four personalities and a seizure of two firearms.

Meanwhile, PRO10 scored big in the campaign against wanted persons in which a total of 138 were arrested during the three-day operation.

Overall, a total of 148 SACLEO operations were conducted with positive results.
RD ACORDA stated that PRO10 will continue to strengthen its police operations especially in the campaign against illegal drugs and wanted persons.

“I really appreciate the efforts of our men and women of PRO10 who are vigorously doing their best in so far as law enforcement and public safety are concerned. Let us maintain this momentum while we also build trust and strengthen our relationship with the community.” He said.

PRO10 urges the public to continuously support the government in its campaign against all forms of criminality in order to attain a secure and peaceful Northern Mindanao. ###