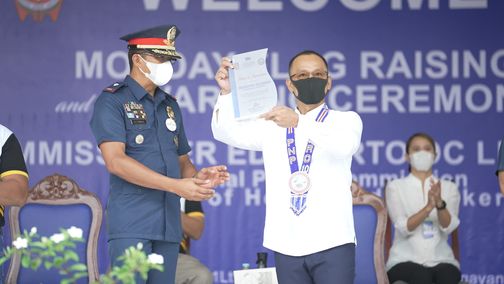 Police Regional Office 10 welcomed Edilberto Dela Cruz Leonardo, Commissioner, NAPOLCOM as he set his foot of this PRO for a command visit and as Guest of Honor and Speaker during the Monday Flag Raising and Awarding Ceremony at Camp 1Lt Vicente G Alagar, Lapasan, Cagayan de Oro City on May 2, 2022.

Commissioner Leonardo was accorded with arrival honors and was received by the host PCOL BENEDICTO T PINTOR, Deputy Regional Director for Operations of this PRO.

His visit aimed to remind the troops that the PNP and NAPOLCOM are brought together as one and that the NAPOLCOM exercises administrative control and operational supervision over the PNP.

Further, Commissioner Leonardo also conveyed his guidance to all PNP personnel especially that the election day is near.

On the other hand, after the activity at the Regional Headquarters, him being the former DENR Undersecretary, Commissioner NAPOLCOM scheduled a Tree Planting Activity and was attended by the Command Group, Regional Staff, Force Commander of Regional Mobile Force Battalion 10, Special Staff and CIDU 10 personnel at Camp Capistrano, Gusa, Cagayan de Oro City. ###