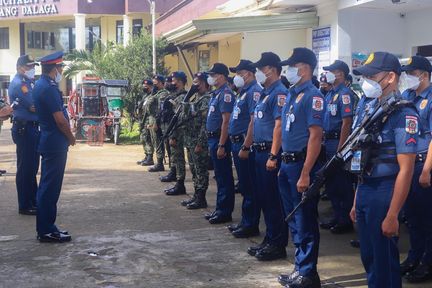 PBGEN BENJAMIN C ACORDA JR, Regional Director of Police Regional Office 10, visited some police stations to conduct inspection and assess their preparation for 2022 National and Local Elections in Misamis Occidental on May 2 and 3, 2022.

During the inspection, the Chiefs of Police briefed the Regional Director regarding the election-related concerns and/or issues in their area of responsibility.
RD ACORDA also had his Talk to Men to give guidance for the upcoming election.

“Failure of election happens sa mga lugar na may maraming nangyayaring kalokohan at dayaan gaya ng vote-buying. I’m urging you to make sure that the vote of the people, the voice of the people will be heard fairly and squarely without the influence of money.” He said.

He further appealed to all personnel to know their boundaries, the line between their professionalism and their personal preferences.

“Continue to be non-partisan and keep the meaning of your badge, to serve with honor and integrity.” He added.

RD ACORDA intends to conduct visit in all mobile forces, RMFB, other provinces and cities to make sure that they are ready for the May 9 election.

Police forces on the ground commit to ensure the upcoming election a safe, accurate, fair and free National and Local Elections 2022. ###