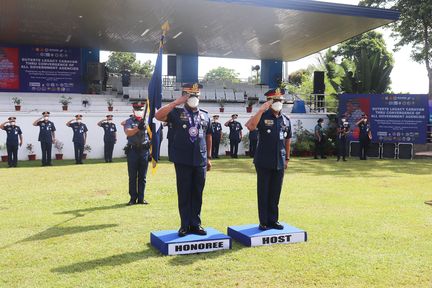 PMGEN CASTILLEJOS was received by the host, PBGEN RONALDO R CABRAL, Deputy Regional Director for Administration of this PRO and was later welcomed by the traditional dance.

In his talk to men, PMGEN CASTILLEJOS said that this event is significant to the PNP because this is a reflection of the PNPs distinct goal of providing services to the people down to the grassroots.

He further said that some of the barangays are influenced with counter-terrorist groups which is why the PNP, in collaboration with other agencies and community, continues to strengthen its ties to sustain peace and order and security here in the region.

“Always replicate our best practices in the PNP, continue to build on the gains of your accomplishments, and march on with deeper fervor and resolve in rendering the best service to the community.” He added.

PBGEN BENJAMIN C ACORDA JR, Regional Director, also said that PRO10 is converged with the different government agencies and other volunteers to continue the Duterte Legacy in the remaining days of his term through the Barangayanihan Caravan.

He also commended all government agencies, advocacy support groups, stakeholders and other volunteers who accompanied the PNP in the Barangayanihan Caravan.