8 Drug Personalities Arrested During Buy-Bust Operation; More than 250K worth of Shabu Seized 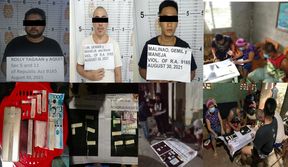 Police Regional Office 10- More than 250K worth of shabu was seized during the conduct of buy-bust operation that resulted in the arrest of 8 personalities in different operation on National Heroes Day, August 30, 2021, all in Cagayan de Oro City.

Citing the report from Regional Drug Enforcement Unit 10, the suspect was arrested and identified as Rolly Tagaan, single, 40 y/o a resident of Pabayo-Pacana Brgy 12, CDOC. Seized during the operation were 4 pcs sachet of shabu weighing more or less 25 grams with an estimated Standard Drug Price of P170,000. Arrested person is determined to be the controller, distributor, collector for illegal drugs operations and is in the link with HVI personalities subject for law enforcement.

Likewise, another buy-bust operation was conducted that resulted in the arrest of Dennis Maneja Lim, aka Kano Lim, 49 yo, single, a resident of Barra Brgy Macabalan and Gemil Maneja Malinao, 23 yo, single, and a resident of Mandaue Cebu City, both temporary rented at Ramonal Village Block 6, Brgy. Camaman.an, CDOC. Confiscated were 4 pcs sachet of shabu weighing more or less 3 grams with an estimated SDP of P20,400.

Moreover, another buy-bust operation was conducted by RDEU-10 that resulted in the arrest of Jayrell Jade Rocero and Edmon Versosa, both single and a resident of Bugo, CDOC. Seized was a piece of small sachet containing shabu weighing 0.14 grams worth P1,000.

Cases are being prepared for filing and for proper disposition.

Police Regional Office 10 asks the public to continuously support the government’s nation-building efforts, especially our campaign against illegal drugs and criminality and report to the nearest units or stations any illegal activities in their area of responsibility. ###