PRO 10 Joined the Commemoration of the 123rd Araw ng Watawat 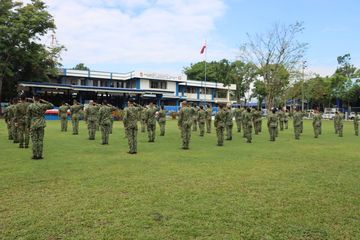 PBGEN ROLANDO B ANDUYAN, Regional Director together with the Command Groups, Regional Staff and all uniformed and non-uniformed personnel joined the observance of the 123rd Araw ng Watawat (National Flag Day) earlier this morning May 28.

The National Flag Day commemorates the day when the Philippine flag was first raised after the victory in the Battle of Alapan in 1898, wherein Filipino revolutionaries led by General Emilio Aguinaldo defeated Spanish troops to recapture the province of Cavite. Under Executive Order No 179 Filipinos are enjoined to display the flag in homes, schools, private and public establishments from May 28 to June 12 throughout this period. This is to give regard and love to our image of national sovereignty.