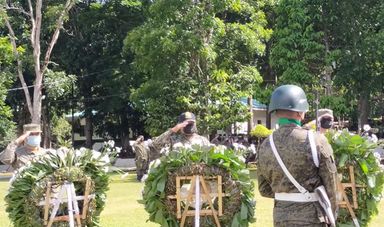 On May 23, 2021 at 8:00 AM, PBGEN ROLANDO B ANDUYAN, RD PRO 10 and Party, attended the Task Force Bangon Marawi "4th Marawi Week of Peace Culmination Program" in relation to 4th Year Anniversary of Marawi Siege held at Rizal Park, Marawi City.

It is important to recognize the heroism and resiliency of people in terms of addressing the conflict that happened to them and rebuilding their lives again for peace-building and recovery efforts.

The activity was carried out by strict implementation of minimum health standard to avoid the spread of COVID 19 and other diseases. It ended at 11:30 AM of same.