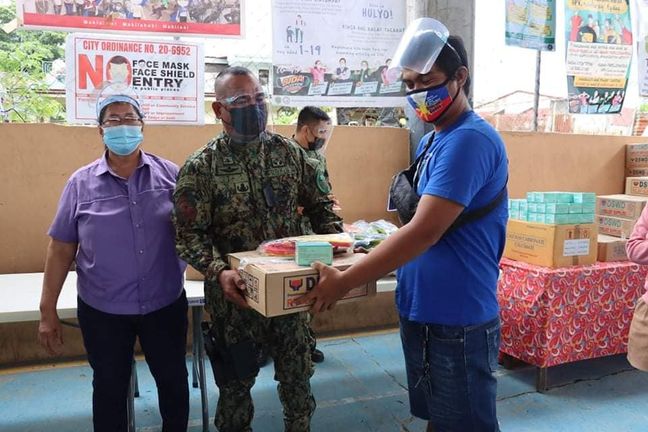 Police Regional Office 10- on May 18, 2021 at 8:30 AM, PBGEN ROLANDO B ANDUYAN, Regional Director together with the Officers of PRO 10, CD Iligan City Police Office together with Brgy Chairman of Brgy Hinaplanon Hon Veronico Echavez, led the clean-up drive and repainting of Police Station 1, Iligan City Police Office to promote stations beautification and cleanliness dubbed as "Brigada Estasyon" a continuous program of PRO10 which was launched last February 18, 2021 a post Valentine activity of PRO10 and as also part of PGEN GUILLERMO LORENZO T ELEAZAR, CPNP Program thrust the Intensified Cleanliness Program.

The PNP organizational efforts continue to make improvement and maintening cleanliness in infrastracture and police station for better services in the community. Thus, the Police Station should be presentable and resemblance of discipline and work ethics of PNP personnel.

It was followed by the Revitalized Brgy Drug Clearing Program with the assessmnt of Brgy Anti-Drug Abuse Council and PDEA 10 at PRAI Office, Tambo Terminal, Barangay Hinaplanon, Iligan City.

IO2 Ramil C Salido, Regional Barangay Drug Clearing Officer, highlighted the said activity by emphasizing DDB Regulation No. 3, Series of 2017 through a lecture with the participants.

Parallel to the said activity was the BRIGADA SA BARANGAY wich is in line with the BARANGAYanihan program which was conducted at Brgy Sto. Rosario, Iligan City wherein during the program PBGEN ANDUYAN, recognized the presence of Hon. Evelyn Asidre, Brgy Chairman of said barangay, and to all the attendees, and the indigent recipients and likewise expressed gratitude to all the stakeholders of Police Regional Office 10. The Barangayanihan has been practice long before by the PNP thru PCR activities through outreach program.

Police Regional Office 10 distributed 184 food packs, 120 slippers, 160 boxes of vitamins, etc to the selected indigent recipients therein. He assure that the PNP personnel of PRO 10 are always in action in extending and sharing of resources through this kind of activity to win the hearts and mind of the people. It also emphasized that the PNP is a servant willing to serve and not to be served.

After the Brigada sa Barangay program, visitation and inspection of all police stations of Iligan City Police Office to make sure that all PNP offices are in compliance to the directives of the C,PNP most especially the cleanliness in respective units/offices. During the visits all personnel were directed to adhere the directives of the C,PNP to fully serve the people in their respective AOR especially this trying times of pandemic. Likewise directed to mainten the cleanliness of respective police offices/ units as part of PRO10 program dubbed as "BRIGADA ESTASYON".

The activity was ended at about 2PM of same date, and was carried out in full compliance to the minimum public health standard protocols set by the higher authorities.