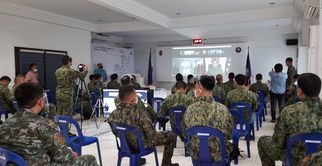 Police Regional Office 10 – had stepped up to boost its anti-terrorism campaign through the comprehensive and extensive cascading of Ending Local Communist Armed Conflict Program.

PRO 10 accorded a Foyer Honors for PMGEN RHODEL O SERMONIA, Director of the Directorate of Police Community Relations and Arrival Honors for PBGEN ERIC NOBLE, Director of PCADG with the Host PBGEN ROLANDO B ANDUYAN, Regional Director together with the Command Group and other PCOs during their visit at PRO 10 Headquarters, Camp 1Lt Vicente G Alagar, Lapasan CDOC on March 16, 2021. It was immediately followed by Talk to Men by the Honoree to boost the morale of the men and women of PRO 10 as they religiously perform their duties and functions.

Thereafter, PMGEN RHODEL O SERMONIA and other Keynote Speakers conducted comprehensive cascading on ELCAC. It was been attended by Command Group, Regional Staff, PDs/CDs, FC, RMFB and Chief NSUs. Thus, we put premium on the integration of peace-building processes through our peace and development initiatives and extensive cascading of ELCAC to eradicate the Communist Terrorist Groups influential factors.

PLTGEN GUILLERMO T ELEAZAR, OIC, C,PNP delivered his inspirational message via zoom-online to all the participants of Police Regional Office 10.

PLTGEN ELEAZAR, challenge all the officers of PRO 10 to vigorously implement the ELCAC Program with conviction. They should take advantage in everything that they learn from this comprehensive cascading activity to come-up with great innovation and strategies that suitable from your AOR to lose the mass support system of local communist, this will eventually led the dismantling of their committees and guerilla fronts that exist in the country. Let’s strengthen the ties that binds progress that eventually tap all stakeholders on our strong stand to defend our republic.

PBGEN ROLANDO B ANDUYAN, expressed his appreciation to the personnel from DPCR and PCADG for their invaluable time in conducting comprehensive and extensive cascading of ELCAC program in Police Regional Office 10 Officers.