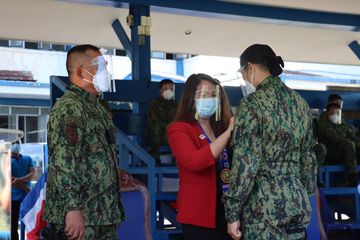 PBGen Rolando B Anduyan, Regional Director 10 in recognition to the dynamic role of women in the community particularly women in uniformed. PRO 10 joins in the celebration of Women’s Month with the theme “We Make Change Work for Women” that coincides the traditional Monday flag raising and awarding ceremony held at Camp 1Lt Vicente G Alagar, Lapasan, CDO City on March 1, 2021.

The ceremony was graced by Dir Mari-Flor Dollaga Libang, Regional Director DSWD 10 as the Guest of Honor and Speaker during the said activity.

In celebration of the Women’s Month, PRO 10 accorded Medalya ng Kagalingan, Kasanayan and Papuri to 18 female PNP personnel in recognition of the contribution of women who displayed outstanding performance of duties as WCPD, FJGAD, Scubasurero and PNP Good Deeds.

In her message, Dir Libang, emphasized the vital role and laudable contribution of women in the success of an organization. “We Make Change Work for Women” has a very deep meaning attached to it as it stands for Magna Carta of Women and it denotes a message of equity and gender-balanced society”.

“I want to instill in every woman that there are no limits in life. Hindi kalian man nagging hadlang an gating kasarian makamit natin ang ating mga pangarap sa buhay, She added.

Likewise, a solemn Eucharistic Mass at St Ignatius de Loyoal Chapel was immediately followed in celebration of Women’s of Month. ###