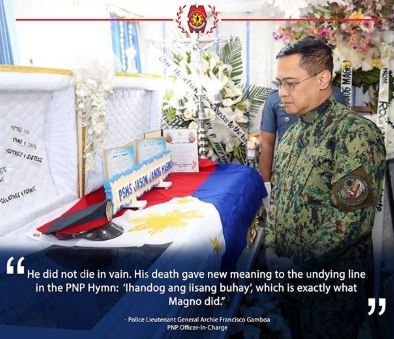 He also visited Balido at the hospital to ensure that her medical needs are attended to.

Magno is a trained Explosive Ordnance Disposal specialist who was among first responders at the scene when an amok armed with a knife and grenade barged inside the school grounds.

Unmindful of his own safety, Magno instinctively used his body to shield the crowd from the blast effects of the grenade and died on the spot.

"He did not die in vain. His death gave new meaning to the undying line in the PNP Hymn 'ihandog ang iisang buhay' which is exactly what Magno did," Gamboa said.

"Magno, Balido and countless other police heroes who came before them, are imbued with the same patriotism of Bonifacio and our national heroes who died for our country, Gamboa said.  (PNP-PIO)