The C,PNP was the Guest of Honor during the blessing of the newly renovated chapel named after St Ignatius de Loyola the Patron Saint of all Uniformed Personnel and followed by the ground breaking ceremony of the PRO 10 Day Care Center and Breast Feeding Building. 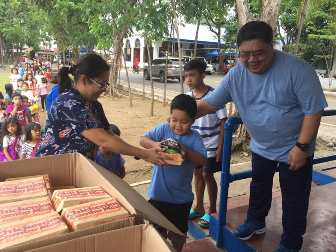 Kids inside the camp got a delightful treat from no less than the Regional Director, PRO10 PBGEN RAFAEL SANTIAGO JR during a brief lull after election duties.

General Santiago treated the kids to their all-time favorite Jolibee Kiddie Meal and ice cream. About 100 delighted kids, mostly residents around the camp, sang "HAPPY BIRTHDAY" to General Santiago who (incidentally) will be celebrating his birthday on May 20. Happy Birthday Sir!

PRO 10 holds a seminar to intensify its advocacy on eliminating violence against women and children that aims to re-examine and re-assessing the policemen of Northern Mindanao. Police Regional Community Affairs and Development Division through the leadership of PBGEN RAFAEL PETICAN SANTIAGO JR., Regional Director conducted a seminar “ Men Opposed to Violence Against Women Everywhere or MOVE advocacy”